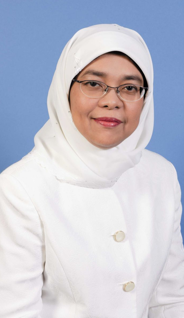 Following the significant Singapore General Election 2011 in May, Member of Parliament for Jurong GRC and SCGS alumnus, Madam Halimah Yacob, was appointed Minister of State for Community Development, Youth and Sports.

Madam Halimah, who studied in SCGS from 1961 to 1971, does our alma mater proud as the first SCGS alumnus to be appointed a Minister.

Returning to School as Guest of Honour for the Honours Day Ceremony on 1 September 2011, she shared with the girls many “fond memories of my 10 years of primary and secondary education in SCGS”, including recollections of Miss Rosalind Heng as her teacher, taking Mandarin for three years until Malay was introduced into the syllabus, and Emerald Hill, a place “not short of spooky stories”.

Known for her commitment in providing women with better opportunities in the workforce, Madam Halimah urged graduating SCGS girls to take time for community work and to return to mentor current students, saying, “No matter how much we accomplish, we will never be complete if we do not give back to society, making other people’s lives complete.”

On September 14, 2017, Madam Halimah was sworn in as Singapore’s President.

Kudos to this alumnus and mother of five who takes “multi-tasking” to a new level.